From a Pioneering Class Experiment to a Dedicated Path of Practice 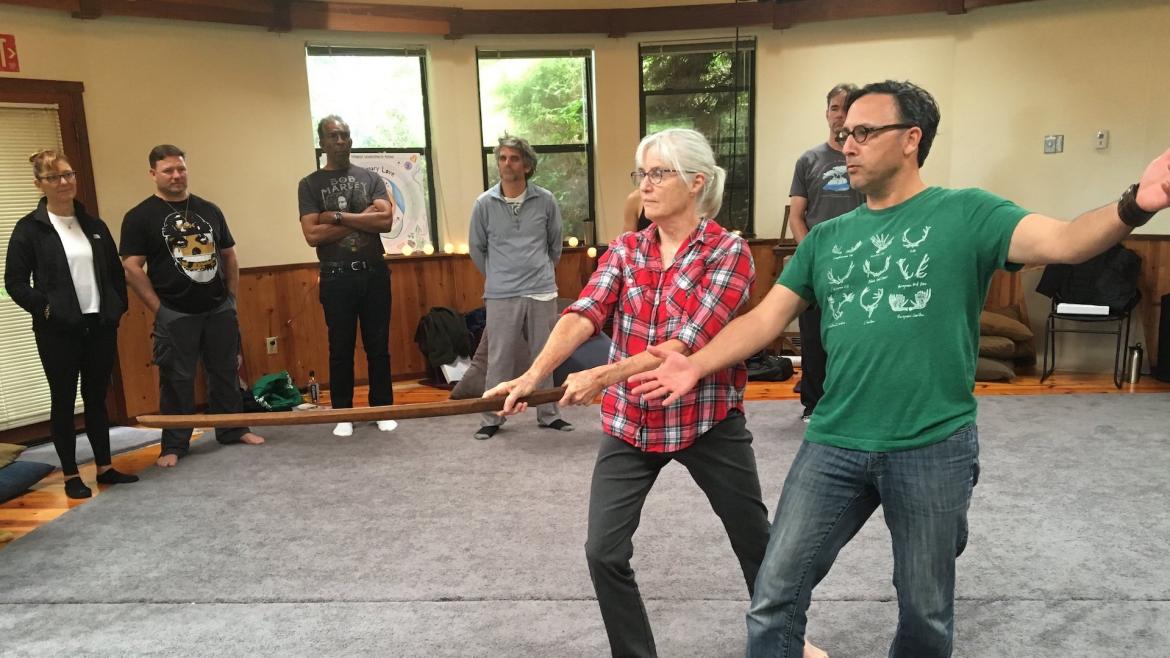 ITP practitioner Charlotte Hatch participated in the first experimental class in 1992. She shares what it was like to be a part of a pioneering program and how this experience has carried over in her current, daily practice.

What first drew you to apply and join the first ITP class cycle in 1992?

In fall 1991, the US started a war in Afghanistan. I was depressed about this and feeling gloomy. Also, at that time I was frequently at George and Annie Leonard’s house because I was helping Annie replace the grass in her lawn with plants that fed the soil. One day George invited me inside for tea. He told me about the ITP program that he, Michael Murphy, Annie and Eric Riswold were starting. As he spoke I felt my spirits lift. I thought; “Finally something positive is happening!” and I signed up right away.

Did you sense at the time that you were part of a pioneering program?

I knew ITP was a pioneering program. George and Michael told us it was. The program had many influences; the most unusual part of it for me was being asked to make 3 Affirmations. One was achievable using normal means, such as getting stronger by doing weight training. The second Affirmation we made was possible within societal constraints but harder to realize and the third one was “Metanormal.” That was the word we used in those days. It meant that Affirmation wasn’t possible if the rules society operates on were fixed.

What was the most eye-opening experience for you as you documented your transformation that first cycle?

Everyone took readings to establish a starting point at the beginning of the cycle. Then we also took readings at the end to show what we’d achieved by following the program. My “Metanormal” affirmation was “My eyes are free of cataracts.” At the end of cycle 1, I didn’t go back to the eye doctor to find out my progress. I doubted that all my affirming had worked and I didn’t want to drag down the results that the scientists at Stanford were compiling. It was after cycle 2 that I had to go to the eye doctor for something else and found out that my cataracts were gone.

How has this process of "research within our own personal practice" carried over into this present time?

I’m fascinated by my experience with Affirmations over the years. I change them frequently, keeping some and relegating others to the back burner. Sometimes, I look back at one that I’ve forgotten and I’m amazed that I’m still in the process of bringing it into my life even though I haven’t been affirming it. The Affirmations take on a life of their own. I think once you hook up your body, mind, heart and soul to an idea that exists in the universe, the energy of that idea enters you subliminally. You have to watch it because sometimes people bring destructive ideas into their integral selves.

What can ITP practitioners gain from reviewing and documenting their own practice experience, almost as if conducting their own research?

Practitioners can gain a subjective record of their growth over time. You can look at yourself from the point of view of an observer who watches your successes and failures without judgment. You might develop more appreciation and love for yourself!

How can participating in workshops and programs like the "9 Commitment Challenge" nurture this mindset in being intentional in reviewing our practice to evolve our extraordinary capacities?

The 9 Commitment Challenge is a program that encourages practitioners to focus on the 9 Commitments for a specified period of time. It’s like “Let’s just try this for 12 weeks. Let’s make an Affirmation. Let’s follow the Commitments. Just for a short time and see what happens.” Of course it’s difficult to stick with it for the whole 12 weeks. Lots of people do, though. Many people in ITP are really dedicated practitioners.

When that first 1991 group started nobody was a dedicated practitioner! We didn’t even know what the practice was! Together, we started on the path of integration that leads to the transformation of our lives. We can make our lives be any way we want, not limited by education, age, race, gender or anything else. We are our own authorities!

This idea is catching on in society now among all kinds of people. It’s a wave of possibility. ITP is part of this wave. The practice provides a clear path to follow to create whatever kind of amazing life you want to have!